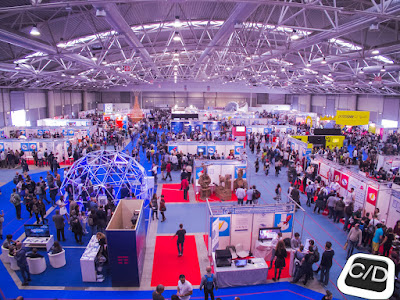 Maker Faire Rome 2016, we're still a bit late even in this second part, but with these videos we're going to complete our collection part 2.

The Sintratec made a laser sintering technology printer that makes possible to print complex objects. All plastic objects have a high mechanical load capacity and show a very high long-term stability, as the example printed to the fair made in Nylon. This technology is particularly suitable for functional prototyping and conducting pilot studies. It looks very promising, even if the bed it's only 110x110x110 mmm.

With 3DPRN we tried the "3D Printer LAB X 2", the first printer we ever seen with has two arms (X and Z axes) independent. It's a very big printer useful for professionals, tha can duplicate two copies of the same object, match a different material for each head or print one only big object when the two beds work in synchro.
The two heads are independent and each of them you can mount a tool different. 3DPRN produces this printer with a version of Marlin Kimbra and slicer self-modded, to achieve the simultaneous extrusion of two filaments on the object.
It's pretty interesting to see it at work; even the self-calibration is made with a removable tool, that can be mounted in place before printing and removed when you are going to start the printing.
The printer filament can be 1,75 or 3 mm; it's fully expandable, by a minimum of 200x200x320 mm print area until of 650x670x500 mm dimensions.

At the end Starslider, a videomaker accessory to record slider movie or slow-motion by yourself without help.
The materials used ensure precision, silence and fluidity.
Their flywheel allows the user to produce fluid shots and with the power of the motors you can move heavy weights, in slanted and vertical positions too; such as pan, tilt or roll.
There are more than 20 different configurations with the complete bundle.
The user can design his shoots and control them with the STARSLIDER app for iOS and Android, manage up to 4 motors with 3 main functionalities: manual control, preset control, and timelapse.
It seems pretty interesting even if you are a blogger and you want to perform your movies in a professional way.

Hi at all, leave me a feedback for this post. Thx